Bill Herrick, farm owner of Mahaki farms, made the decision to plant Rocket Fuel based on success with a pure stand of Puna II chicory from PGG Wrightson Seeds. The concept of adding clover blends within the seed mix was attractive due to extra growth rates and being a cost effective feed.

For establishment the land was sprayed out with 4L/ha of glyphosate and the soil was worked by either discing or ploughing followed by levelling then power harrowing and a roller drill. The cultivation process provided a clean, weed free seed bed. Bill says that the roller drill is the key step to establishing clovers. By using this method he could maximise clover content with the Rocket Fuel mix. An application of starter fertiliser at 350 kg/ha was applied at sowing and a further application of 80 units of nitrogen was applied during the establishment phase. Rocket Fuel establishment took around 70-80 days.

The lambs were introduced onto the crop shortly after purchase. Bill used a combination of careful animal management through grazing and a strong emphasis on animal health with vaccines and boosters given at appropriate times. Bill was impressed with the growth rates of Rocket Fuel as he was forced to reduce his round length from 21 days to 14 days due to conditions. Bill says “out of roughly 500 lambs that were grazing the Rocket Fuel, around 480 lambs matched the target kill weights.” The lambs were stocked at 30 lambs per hectare and grew at an average liveweight gain of 300 g/day with some exceeding this rate. Bill finished a total of 3200 lambs over the summer and early autumn period and a further 150, 15 month old bulls and 400 bull calves were grazed on the Rocket Fuel.

The crop, even in early winter, has strong plant numbers. Bill has had previous experience with chicory and will carry Rocket Fuel in to the following season. Bill sees management changes going forward, but the crop certainly will still provide strong growth rates for his finishing stock. 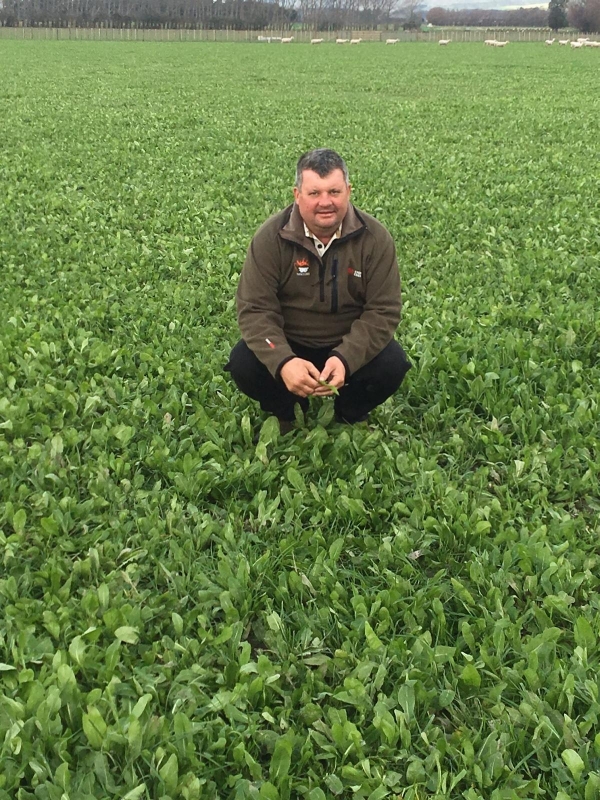